We use the Git version control system with github.com to manage submissions and grade assignments.

Once you have a GitHub account, set up Git on your computer by following this guide. Be sure to select your operating system at the top of that guide. Also open the Input informational box for information on how to use git from the command-line, because we will be using that in this guide.

We will explain the steps needed to work on and submit assignments in this guide. To learn the basics of git, read git - the simple guide and try out the Git command-line. If you’d like to learn more, have a look at these resources.

On GitHub, we will create a private git repository for you, which is owned by us, and is only visible to you and the compiler construction team. This repository will host assignment templates and your submissions. Note that you do not have write access to this repository, you can only read from it and submit assignments to it. This is to ensure that you cannot mess with submitted assignments after the deadline.

First, find your private repository in the TUDelft-IN4303-2015 organization on GitHub, it should be called student-id where id is your student id. Remember your id, as it is used later. Go to the repository and press the fork button to fork the repository into your account.

To actually do work in the Git repository, you need to make a local clone of the repository on your computer. You can find the URL needed to clone on the bottom right of the page, be sure to use HTTPS.

Open up the command line and make a local clone with your URL:

Now cd into the local clone and confirm that it works:

To make a connection with the upstream repository we forked off, we need to add another remote to the local repository. Use the following command with your id:

Confirm that it works by fetching commits from upstream:

Your local repository is set up now! Follow the steps below to work on an assignment.

Every assignment is put into its own branch, named assignment1, assignment2, etc. The correct assignment branch must be checked out in your local Git repository to be able to work on it. The steps to check out a branch depend on whether we provide you with a template, or if you continue with work from a previous assignment.

If the assignments asks you to check out a template, which for example assignment1 does, use the following steps:

This checks out a fresh branch from the upstream repository. It does not contain any of your previous work.

If the assignment asks you to continue from the previous assignment, which for example assignment3 does, use the following steps instead:

Now you have the assignment branch checked out in your local repository and can start working.

Whenever you have changes that you’d like to save, such as after getting (a part of) the assignment working, you need to add, commit, and push your changes:

Pull requests are used to submit an assignment in your origin repository to the upstream repository.

Make sure you’ve pushed all your changes first, then go to your origin repository (your fork) on GitHub. If you’ve recently pushed changes, there should be a button with Compare & pull request for the right branch, click that.

If there is no button there, go to the Pull requests tab, press New pull request, and set both branches to the correct branch for the assignment.

If all is well, it should display Able to merge. These branches can be automatically merged, and you can press the Create pull request button to submit your assignment. If not, check the troubleshooting section. 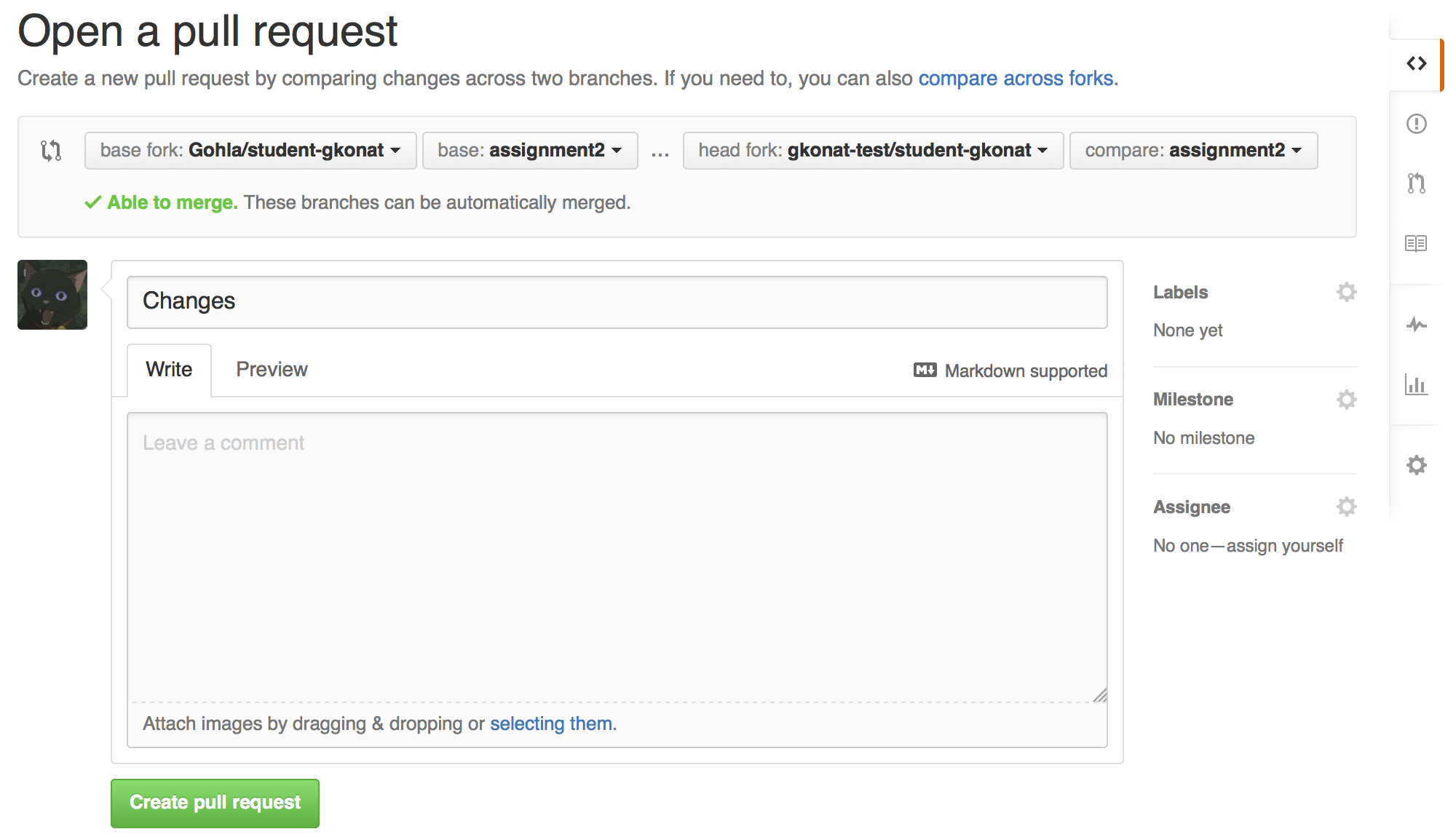 We will grade your assignment and post the results on the pull requests, so check back later.

Switching to another assignment

Pulling in changes from upstream

If there’s something wrong in the template for an assignment, we fix it in the upstream repository, and you have to merge in those changes. Use the following commands to merge in changes (use the correct branch!):

In most cases, Git will automatically merge in any changes, but sometimes conflicts can occur. See Resolving a merge conflict on how to resolve conflicts.

This guide uses command-line Git commands, but if you’d rather use a GUI, use SourceTree.

When Git complains about not being able to push because you do not have access or rights to the repository, this probably means that you’re trying to push to the upstream repository rather than origin. Push to origin using:

Git will tell you which command to run to set the upstream branch, just execute that. In this case:

Out of date branch

You cannot push changes to a remote when that remote has changes that you haven’t yet pulled, you’ll get an error like:

First pull changes with git pull and then push your changes.

When you have changes in your local repository that you have not committed yet, and you try to pull, Git may complain about your changes being overwritten. First add and commit your changes locally with:

and then pull changes with git pull.

When pulling without a tracking branch being set, you will get the following error:

Git already hints to the command that fixes the problem. Since you are pulling/pushing from origin, the following command will set the correct tracking branch:

and then pull changes with git pull.

If a pull request cannot be automatically merged, your branch is out of date with the branch on upstream. Merge in changes from upstream (use the correct branch!):